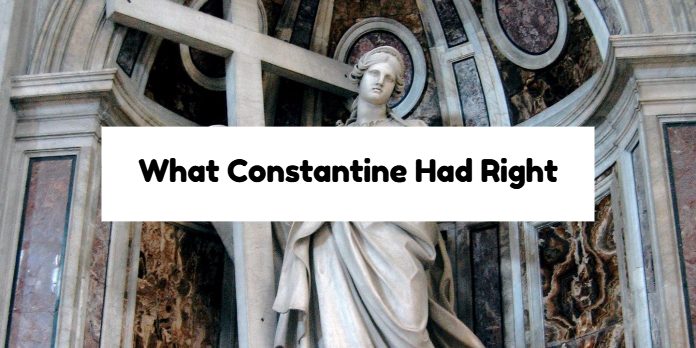 Shortly after the Emperor Constantine converted to Christianity early in the fourth century A.D., he issued the Edict of Milan (in 313), not only legalizing Christianity, but actually making it the official religion of the Roman Empire. This resulted in such a close relationship between church and state—the “Christendom” arrangement—that infant baptism was for all practical purposes the entry-point into citizenship. Thus, often these days when some religion is seen as being too closely linked to political power, the specter of “Constantinianism” is quickly raised.

The criticisms of the Constantinian arrangement are legitimate. When the church allies itself too closely with political power it loses the freedom to be the kind of church that God wants it to be. The late Lesslie Newbigin, who served for many years during the twentieth century as a missionary in India, made this case very effectively. When Newbigin returned to the British Isles after his retirement, he was shocked by the major cultural changes that had taken place there, as well as on the European continent and in North America. When he had begun his career he had seen himself as being sent out from a Christian culture—where Christianity was “the established religion”— to a mission field. But now he realized that his own homeland had become a mission field. Christians in the West, Newbigin observed, could no longer take a dominant Christian influence for granted. We are now, he said, “post-Christendom.” But that is not a thing to be regretted, he quickly added. The church should always see itself as “missional.” The Christendom arrangement lured the church into a sense of “owning” the culture that kept it from full faithfulness to the gospel.

All of that is good and important. The problem, though, is that sometimes the folks who make much of the dangers of Constantinianism and Christendom are placing too strict limits on how Christians can relate to public life. This was made clear to me in a conversation with someone who thought that my own views were dangerously close to Constantinianism. I pushed the person to explain why he interpreted my perspective in that manner. His response came in the form of two questions: Do I think that Christians can work effectively for Christian goals “within the American political system”? And do I believe that Christians can not only endorse the use of violence in law enforcement and military campaigns, but actually themselves serve as police and members of the military?

I responded to both questions in the affirmative, but also with the necessary qualifications. I believe that there are limits to the kinds of political compromises that a Christian can agree to. And I also believe that police action and military campaigns must be conducted within the kind of moral framework associated with “just war doctrine.” The person’s response was an “Aha! So you admit it. You really are a Constantinian!”

Actually, I do think Constantine had something right. And here I take an important clue from Lesslie Newbigin. As critical as he was of the Constantinian/Christendom arrangement, he insisted (in his Foolishness to the Greeks, 100-101) that we must be careful in our assessment of the errors of that arrangement.  “Much has been written,” he observed, “about the harm done to the cause of the gospel when Constantine accepted baptism, and it is not difficult to expatiate on this theme.” There can be no question, Newbigin said, that the church has regularly fallen “into the temptation of worldly power.” But he goes on: Should we conclude from this that the proper alternative was for the church simply to “have … washed its hands of responsibility for the political order?” Do we really think, Newbigin asks, that the cause of the gospel would have been better served “if the church had refused all political responsibility, if there had never been a ‘Christian’ Europe?”  The fact is, he notes, that the Constantinian project had its origins in a creative response to a significant cultural challenge. There was in Constantine’s day, he says, a spiritual crisis in the larger culture, and people “turned to the church as the one society that could hold a disintegrating world together.” And for all the mistakes that were made along the way, it was nonetheless a good thing that the church actively took up this challenge.

That is insightful. There is nothing wrong with working within the present political structures to serve the cause of righteousness in the world. But we must always do so with an awareness of the Constantinian danger of forming an unhealthy—and unfaithful!—alliance between the church and political power.