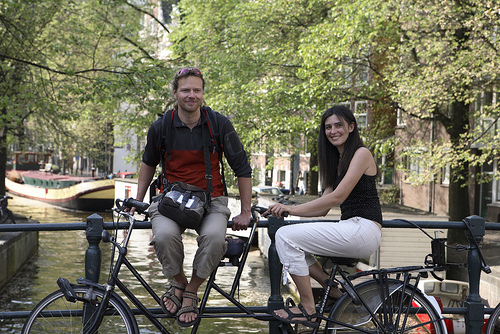 This article is one in a series of interviews with long-term international bike tourists.  This time I talked with Harry Kikstra from BikeTravellers.com to get his take on things.

See a slideshow of Harry and Ivana’s travels here!

World Bike Touring Examiner (WBTE): Would you please explain a tad bit about where you’ve been and where you’re going.

Ivana & Harry: We are Ivana (33, Argentina) and Harry (39, Netherlands) and we are currently cycling the Americas from Prudhoe Bay, Alaska to Ushuaia, Argentina, visiting all the countries on the mainland on our way.

WBTE:  How long have you been on the road?

Ivana & Harry: We started in July 2008, so now about 15 months. We think we are almost halfway. But both of us have been travelling the previous years as well, on other cycling and climbing trips.

WBTE:  Why the bike?  What is it about the bike that made you choose it over buses and trains and planes?

Harry: Cycling is the only way to go. Not just for obvious ecological reasons, but it the only way of transportation that:

Ivana: Besides this: buses make me sick (and most cars, I’m afraid) and I basically I only like to travel by bike.

WBTE:  What prompted such an extended journey?  Had you done a lot of touring before?

Harry: Ivana had done a long previous trip: Around New Zealand, then from Malaysia to India, hopping over to Turkey for a tour there. I had mostly been climbing the past decade and had only done a few small trips (around the English channel, around the Irish Sea, from Amsterdam – Zermatt on a Tandem), all about 2-3 weeks. Of course in the Netherlands you basically bike before you walk, so I am used to cycling, it’s my way of life. I never owned a car in my life as it is not needed with the great cycling and public transport infrastructure we have.

We met in Tibet when I was climbing Everest and she was on her long cycling trip. We met again after my climb, in India, and I basically made her cut her bike trip short as she had planned to cycle through Europe as well.

We did do a short tour from Rome to Germany, but I promised Ivana that I would make it up with a long trip together. She wanted to see more of her home continent (South America), I wanted to show her the wonderful nature and good people of Alaska, Canada, The USA and my friends in Guatemala. So we decided to just go all the way

WBTE:  I know there are plenty of wonderful days when the sun is shining and you’ve got the wind at your back.  But there are also days when it’s raining or you face a headwind or you’re climbing a hill that just won’t end.  How do you get through those days?  What keeps you going?

Harry: Frankly, mostly there is not much choice. There have been few days of tailwind so far, but also few days of really horrible weather, though we had some decent hills. You just have to face the facts and be pragmatic: stopping will not do much good on the middle of the hill and as long as the luggage inside the Ortlieb bags is dry, it does not matter so much if you get wet as long as you are warm enough.

As with most of life, experience will teach you that the bad days also define the good ones and often create the best stories and memories. You have to stay open to see what will be ahead. Once you accept that you cannot plan everything then you will be amazed what your journey throws at you, both positive (often) as well as negative (sometimes).

People who are just complaining about life or are afraid or getting out of their comfort zone or are afraid of other cultures will have trouble adapting to this. But once they do, they are lost forever, as once bitten by the BikeTravelling bug there is no turning back from a more open and receptive lifestyle!

WBTE:  As hard as it is to pick out one or two highlights – would you, could you?   Tell us about a couple of those incredibly wow-ing, drop-your-jaw experiences you’ve had.

Harry: The overall experience is much stronger than separate positive incidences, even if we had many. It is interesting to see that many times an experience only turned out very special in hindsight. Often we struggled up a hill or through a forest or desert while cursing the environment and life we were in while the sections turned out to be very special looking back.

The Dalton Highway in Northern Alaska is very tough, but also wonderful for its nature and remoteness. We really enjoyed the Redwoods in Northern California, getting invited on an Indian Potlatch and playing with a fox on the Cassiar Highway in Canada, seeing the coastline in the USA, enjoying the Baja California desert and the Mexican Highlands. Personally I also enjoyed off-bike activities such camping in Yosemite in winter, climbing Pico de Orizaba in Mexico, snorkelling with stingrays in Belize and seeing the independence parades in Guatemala.

But most of all, it is the people we met all the way. Our many CouchSurfing and WarmShowers hosts and the dozens of strangers that have become good friends, from all types and backgrounds. The tens of thousands that have waved, smiled or even applauded from the side of the road. There is good in the heart of all people that you can only discover by going out and finding them. See the ‘1000 Americans’ section on our blog for some photographic impressions.

WBTE:  What about those days you wish you could forget (but you know you never will)?  Those days when everything goes wrong and then even more goes wrong?  Tell us about a couple of those.

Harry: We spent my B-day in the rain on a muddy and steep section of the Dalton dirt road (Alaska) called “The Rollercoaster”. ‘Nuff said. We had to buy a big bag of ice and stuff them in our waterbags and put them on our body to cool down enough to sleep in a hot Mexican night. We got blown off the road in Baja California with no water in sight and Ivana had some scary close encounters with wheels of a truck. And most of all, I hate mosquitoes. I do not discriminate – I hate mosquitoes in Alaska, in Canada, In the USA, in Mexico and in Belize. There are few things more annoying than climbing uphill with 4 miles/hour on a muddy road in Alaska while overheating and being eaten through 2 layers of clothes by Mozzies at the same time.

As a climber I have learnt to focus – simultaneously focus on the present for safety, and ahead for relief as you know the suffering will stop at some time.

Fortunately our Santos bikes have not had a single problem, other bike travellers have had frustrating experiences with their bikes which can really ruin your trip.

WBTE:  You’ve toured through many countries and I know they each are unique and have their advantages and disadvantages.  But, if you were to talk with someone relatively new to cycle touring, where would you recommend they go?  Why?

Harry: It depends if you are an experienced cyclist and traveller to start with. For beginning cyclists it is best to start in ‘easy’ countries like The Netherlands and Denmark, where cycling is part of the culture (meaning that drivers respect you) and separate bike lines (and right of way!) make cycling easy, fun, flat (!) and safe, while there is a lot of culture and history and helpful people. And there is a bike shop in every town and a pump in every house.

If you are already physically active you can head to some more hilly parts, basically the rest of the world. Ivana loved Eastern Asia for the safety and people, I loved the remoteness of Alaska and Canada. You can also tour a few weeks in Europe and see a new country and culture every few days!

There are a lot of great routes in the US, see the Adventure Cyclists organization.

But cycling is only a small part of the travelling, so also try to get abroad and immerse yourself in new cultures, even if going just over the border into Mexico, which is a hidden gem.

WBTE:  Any special tips or advice to wannabe tourers?