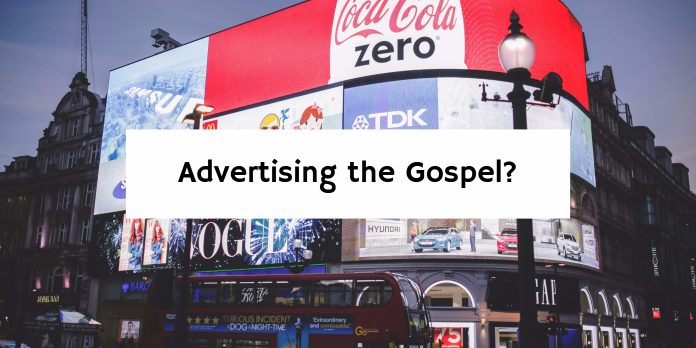 This originally appeared in a posting at Duke Divinity’s “Faith and Leadership” site: http://faithandleadership.duke.edu/blog/10-28-2009/richard-j-mouw-advertising-the-gospel

I’m a “Mad Men” fan. I am a year behind, so I watch Netflix DVDs while on my exercise bike each morning. In a Season 2 episode the head of Sterling and Cooper’s television division gets in trouble for a poor ad placement. At a key point in an ABC Sunday Night Movie, a murderous Russian spy is described as an “agitator.” And that point they cut for a commercial break touting a Maytag washer as “the Amazing Agitator.”

I was reminded of a commercial that showed up during the airing, in the late 1970s, of Zeffarelli’s six-part series, “Jesus of Nazareth.” Just after Jesus was baptized by John in the river Jordan, they switched to a commercial for soap: a head-and-shoulders shot of a guy taking shower, with a voice-over promising that with this product “you can be really clean!”

I don’t know enough about the advertising business to determine whether “Mad Men” is a fair representation of the business — although I haven’t read anything from that part of the world accusing the show of caricature. I enjoy the show’s depictions of discussions about how to present a product. Indeed, I find them spiritually and theologically instructive.

In my early days of teaching, at Christian liberal arts college, I was asked to serve on a faculty task force that advised the admissions people about how to portray the school in ads that would reach high-schoolers. We spent hours studying and discussing the magazine ads of dozens of evangelical colleges, focusing on the question, “What is this school saying about itself?” I was surprised how often the basic message seemed to be that the school in question had pretty young women and handsome young men who smiled a lot at each other in social settings. We suggested a very different message: that our school had distinguished faculty. The strategy basically bombed. High school students do not choose a college on the basis of how many scholarly works the faculty produces.

What I learned from that experience was that advertising has to appeal to felt needs and desires. That does not mean that we simply run ads for colleges that appeal to the baser instincts. But there is a “cultural exegesis” that goes into framing advertisements. Many of the staff discussions on “Mad Men” are exercises in exegetical discernment.

To say that there is a legitimate parallel worth exploring between advertising and preaching, evangelism and the like is not automatically to cheapen our efforts to present the Gospel to the larger culture. We will soon enter a season in which we will once again sing about the birth of a baby in Bethlehem: “The hopes and fears of all the years are met in Thee tonight.” Not a bad stimulus for exegeting the hopes and fears of our cultural peers.